Beyond Ice by Helene Levey Zemel 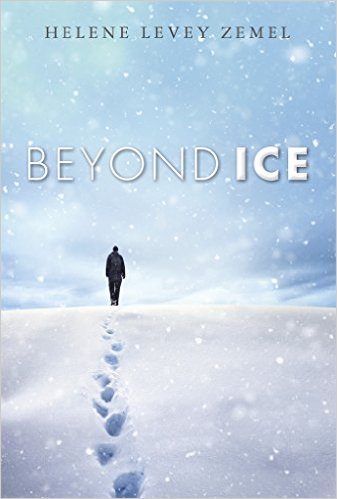 After the death of his wife, Dr. Martin Singh has become more and more involved in his work. He and his associate, Professor Jim Harrison, believe that they may be on to some important scientific discoveries that will help to prolong human life. They are intent on keeping their discoveries under wraps for the time being because they don’t believe that the scientific community is quite ready for what their research reveals. They set up a secret laboratory in the beautiful wilderness of the Maine North Woods and are excited because Martin’s son, Pete, and his young bride, Liz, will soon be joining them at the laboratory.

As the story opens up, we find Julie Miller, a Long Island housewife and well respected high school music teacher, looking forward to the start of the new school year. While busy at work preparing her music students for the school’s annual musical production, she suddenly falls ill with a life- threatening illness. This upsets the entire Miller family including family dog, Seymour. Julie turns to the Internet to find support from fellow sufferers. One of the members of her Internet forum recommends that she attend a conference given by the brilliant but reclusive Dr. Martin Singh and his associate. Could this offer Julie hope or might it lead her down a dangerous path?

Later that day, Seth returns home from his senior year classes. He pulls up into the driveway and gets out of the car. He rings the doorbell expecting Elena to open the door. When nobody answers, he fumbles for his key, finds it, and opens the door. He is surprised when Seymour does not come to greet him. A sense of panic comes over him. His heart starts pounding in his chest.

Seth leaves the hallway and walks into the living room. He finds the dog limp on the floor. He crouches over Seymour. The dog appears to be breathing. He rubs the dog’s body firmly, and Seymour lifts his head. The dog appears dazed and bewildered.

“What’s the matter, Seymour? What happened to you? Where is mom?”

Seth calls out Julie’s name several times while searching the house. By now he is in a panic, and he breaks out into a cold sweat. He can barely move his fingers as he calls his sister on his cell phone. After two rings, Alexandra answers her cell phone.

“Alex, please come home as quickly as you can. Mom is missing from the house and something seems to be wrong with Seymour.”

“Perhaps mom just took a walk or went out with Aunt Irene.”

“Why would she go out on such a cold day? She would certainly have told us if she had plans with Aunt Irene. Besides Aunt Irene is probably still at school.”

“I don’t know. You’d better call Dad. He’ll know what to do about Seymour. I’m leaving school right now. I should be home in about twenty minutes. Give Aunt Irene a call, too, to see if she might know Mom’s whereabouts. Try to stay calm until I return home.”

Seth ends the call with Alexandra and then calls David at the veterinary clinic. The receptionist answers the telephone and hears the panic in Seth’s voice.

“Mom is missing and something’s wrong with Seymour,” Seth blurts out in a panicked voice.

The receptionist finds David in one of the examination rooms and tells him there has been an emergency. David speaks to Seth and tells him that he is on his way home. David gets one of the veterinary technicians to come into the room to stay with the dog that he had been examining and its owner. He explains to the dog’s owner that an emergency has come up at home. David apologizes and tells his patient’s owner that his associate will be in to see them in a few minutes as he must return home. David puts on his overcoat and takes a medical kit with him. He pulls his SUV out of the veterinary clinic’s parking lot and starts on his way back home. When he arrives at the house, he opens the door and is greeted by Seth.

“Thanks for coming so quickly, Dad. Mom’s missing and I found Seymour collapsed on the floor. I’m scared something has happened to Mom.”

Helene Zemel spent her childhood and young adulthood studying for a career as a concert pianist. She received a B.A. in Music from Hofstra University and an M.A. in musicology from Queens College which is part of the City University of New York. She performed in numerous piano recitals and spent many years teaching piano. Ms. Zemel also held various positions in business including accounting, marketing, and insurance sales. She received an M.B.A. from New York Institute of Technology.

Ms. Zemel grew up on Long Island and also raised her family there. The opening beach scene was inspired by her childhood on the island. In March of 2015, after the death of her husband, she retired to Oklahoma City where she is enjoying the friendliness of the people. This is her debut novel.