Today I have a great review for Innovera Yakov: The Journey of A Thousand Eyes. But first, a quick sneak peek, which includes synopsis and book excerpt. 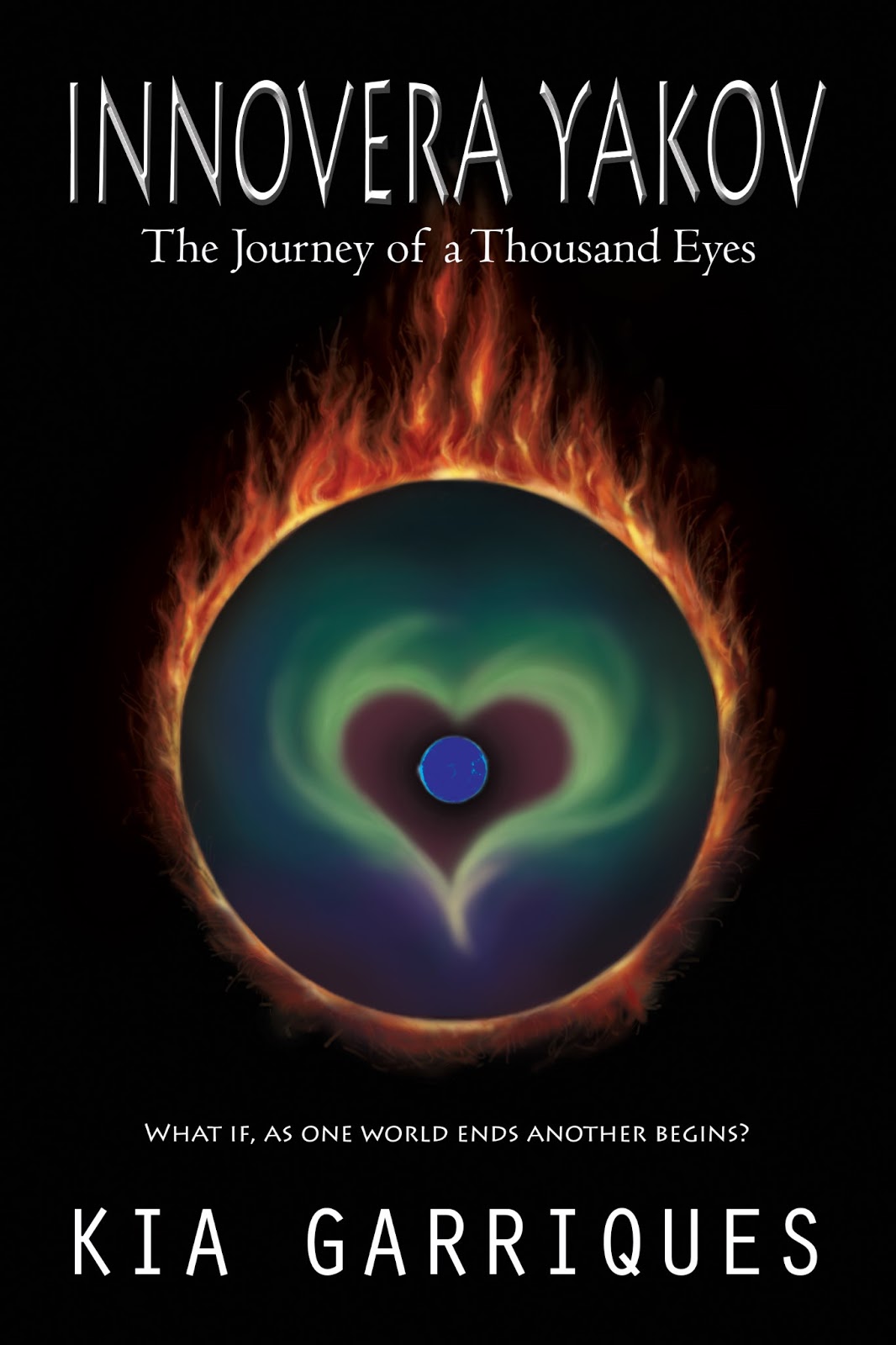 Book Blurb:
Innovera Yakov is a beautiful world of crystals that turns under five moons and two brilliant suns that never set. Flitters take care of domestic chores while Starbirds and Starflies soar through the never-ending sunlight of this crystalline world. The Circle of Knowing decides their fate; the forbidden forests of the Dimmer Zone swallow trespassers. And at the very edges of Innovera Yakov there is the terrifying watery darkness of Verheer.


We meet Ayana, the healer and lonely outcast with her scarred face; Vinton, her protector (or is he her imaginary friend?); Gamma and Blu Tara, the beautiful, fiery twins who can kill with one look. These twins are important characters in the book. They could hardly be more different from each other. Krave, beloved by Gamma, hated by Blu Tara, ‘tall and upright as a polished spear with a beautiful crop of golden hair that cascaded down his back in waves’; his ‘brother’ Skylar, pure trouble with ‘muscles on his arms and legs that stood out in lumps’; Ryder with his crystal spear, forever seeking Ayana’s approval although she, refusing to believe she's worth it, can only wonder, ‘What does he see in me?’ And Ice, mysterious, dangerous, murderous with eyes like bright furnaces who feeds on Innoverans. These young Innoverans are often haunted by a forgotten past recalled only in strange dreams. They form friendships, make enemies and face constant physical and emotional challenges that test them to their limits. They have amazing powers; they can fly, they can communicate through 'thought-words', their minds can travel to other worlds. They harbour secrets.


But life is not easy on Innovera Yakov and the young Beings must live in constant fear of Blu Tara; ‘What I want, I have. What I can’t have, I destroy.’ They find that the great powers they are gifted with are nothing compared to the dangers they face. They must shelter from Solar-storms. To fall in love is dangerous. Lovers long to combine to become stronger, better Beings but it can go terribly wrong and when that happens they perish. Their survival is further threatened by Ice, who consumes Innoverans and holds both Blu Tara and Ayana in his control.


Everyone seeks a partner with whom they can ‘merge.’ This desire to ease the passage through life by joining forces with a true companion, is one of the main themes of the story. Love for Blu Tara, is a terrible thing. She tells her sister, ‘It is a curse. You will scoop out your core and abandon it just to have the Being that you love... You will steal another person’s life force if it makes it easier to get it. You will kill or die for it. And you’ll hate yourself for the weakness that it brings on you.'


They are told that they must embark on 'The Journey', this journey will be more terrifying than any of them could imagine and a strong leader must be elected from their midst. They are shocked to discover who that leader is, none more so than the chosen one herself. Many of them will perish as they make their way through the watery darkness of Verheer while battling the army of underworld warriors bent on destroying and consuming them.


Finally, diminished in strength and numbers, they reach their journey’s end only to learn the final brutal truth.

Book Excerpt:
Blu Tara stared her sister in the face. ‘Let me tell you what you don't know about love, Gamma. It is a curse. You will scoop out your core and abandon it just to have the Being that you love. You will steal another person's life force if it makes it easier to get it. You will abandon the world you have been cradled in, betray everything and everyone you care for. You’ll give up your name for it.’


Blu Tara's voice went soft and dreamy. ‘You will gladly close your eyes and embrace the world of darkness. You will kill or die for it. And you will hate yourself for the weakness that it brings on you. So don’t talk to me about love.’


Gamma shook her head. ‘You're not making sense,’ Blu Tara. ‘You talk as if... I’m the one who should be upset about all this.’


Blu Tara lifted her hand dismissively. She pointed a hot finger at Gamma. ‘Anyway don’t forget what we are.’


'Different. Strange. Something to be frightened of. Two Beings that can fuse and burn everything to ashes. That's the way they all see us down there. That's what the Stardog wants from you - the powers you possess.


‘I hate them all. With their suspicious, shiny faces and their empty games. I hate that Voice which drones on and on at us in the Learning Dome as soon as we've finished resting.


Innoverans! All those perfect, pretty Beings; they remember nothing — it’s the curse of this shallow, shining world. Tell me, Gamma - what do you remember of the world we come from before your Odors Apeno dumped us here?’


Gamma swung around to face her sister fully. ‘Blu Tara! What's got into you? Where’s all that coming from? I've never heard you speak like that before. This is about Krave and I- not you!’


Krave and you - don't make me laugh. And, oh! Here’s a big difference — between you and I this time, Twin Sister. It’s the answer to your question that you brought me up here to ask.’ Blu Tara mimicked Gamma's soft and musical voice, Why do you want to kill Krave?


Here's the answer, Gamma. I will do whatever I have to do to save myself. I'm the half of you that's not like you. I don't have a weeping heart. Now I'm out of here. I need my Rest.
My Review:


This book definitely did its job when it came to taking the reader to a fantasy world filled with wonders and great adventures.


The plot is unique and very different from any I’ve read before. When you read certain parts, it almost feels as if you’re watching a movie instead of reading a story. However, I did feel as if there were parts of the story I would have liked for the author to develop more since I found myself a little confused at times. And I would have liked for more backstory on some of the characters as well.


But the originality of the characters and the story itself. I’m definitely looking forward to reading more from this author.


Audio Link to listen to the first chapter of the book:


Read the first chapter of the book here:

Posted by KrissyGirl at 6:53 PM