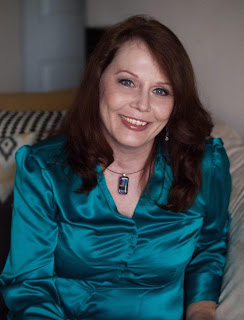 Cheri Roman is a writer, editor, teacher, wife, mother, grandmother and friend, in whatever order works best in the moment. Most days you can find her on her blog, The Brass Rag, or working on the next novel in her fantasy series, Rephaim. Cheri lives with her husband and two Chihuahuas in St. Johns, Florida.
Website | Facebook | Twitter 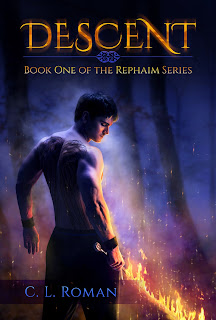 Genre: Epic Fantasy
Publisher: Brass Rag Press
Release Date: July 1, 2013
Amazon
Book Description:
When Captain Fomor leads his unit of six angelic warriors to Earth in an attempt to escape the war in Heaven, not only do they unwittingly set into motion the age of legends, but they must face an inescapable evil that threatens to destroy them, the humans they fall in love with, and the Earth itself.
Creating a new life on antediluvian Earth is no where near as simple as Fomor’s team had hoped it would be. A tragedy occurs early in their sojourn that convinces the seven that they must avoid both humans and fallen angels. But when they unexpectedly meet with the Nephilim, a tribe of unusual humans with unknown origins, the results are unprecedented. However, falling in love with humans is the least of The Unit’s problems. Mankind is busily descending into a maelstrom of violence and profane religion. The Fallen, angels transformed into demons by their rebellion, have regrouped and are using the tattered remnants of their power to prey upon humankind in horrific ways. Not only is a demon demanding human sacrifice in a nearby village, but the world is careening towards a global disaster that not even The Unit can stop.

Excerpt:
It was a black night in the human village of Kutu. The moon hung low in the sky, hiding its face behind a stand of trees from the horror on the ground. The demon didn’t mind the dark. His distress had a different source.
Gone! Drained it dry didn’t you? And left me nothing, not even a drop! A long clawed foot flicked out to nudge the body. What small things these humans are. This one is just a juiceless sack now, nothing left for me. A selfish thing you are, Bansh. No wonder our Master wants you hunted, wants you punished for your betrayal. You followed him into battle against the Creator and then abandoned him.
The burnt, scarred head lifted to scent the air. Someone is coming. Good enough. The Eater is long gone anyway, and the Master will not mind if I profit a little from this discovery. And this one, a gnarled talon reached out to poke at the corpse again, is far past caring about anything.
From the hut nearby came the stealthy sounds of a child escaping her mother’s watchful eye.
“Baby, Baby is that you? Mama will skin me if she catches me out here after bed time. Baby?” The little girl crept carefully around the corner of the mud brick house and picked her way through the low vegetation. “Come on little kitty, you don’t want to get eaten. There’s lots of eaters out at night.”
The tiny light of her candle flickered in the breeze, shedding a pool of illumination too small to give much help to her eyes. Her ears were more useful and she heard the reptilian scrabble of his claws as he scuttled up the tree into hiding. The skin under the soft blond curls tightened slightly, but she was too intent on her search to be frightened yet. She heard the soft mew of the kitten to her left, turned toward it and stumbled, her foot caught in something on the ground. She thrust her hands out to catch herself and dropped the little candle. Her hands shook in the sudden dark as she struggled to free her foot from the soft cloth it was tangled in. Above her, the thing in the tree salivated as the girl’s heart began to pound.
What is it? What is it? Her thoughts scurried frantically as the child thrust small fingers between the cloth and her ankle. The brush of cold, dead flesh against her palm dried her mouth with fear. Shivering, she struggled to her feet just as the moon poked his pale face above the houseline, throwing a sliver of light on the human wreckage in front of her. The thing in the tree cursed as her screams rang out, bringing more humans, bringing the security of numbers.
The child’s terrified screams escalated, blending with the shouts from the surrounding houses. As running feet rushed to protect, he shrank back into the dark and resigned himself to another meal of vermin blood. Even the little cat would have been better, but the girl had found it, and clutched it against her thin chest like a shield. His mouth foul with silent curses, he scuttled away, further into the dark. His hunger was another mark against the Eater, the betrayer of the Master. A grimace of pleasure stretched the lipless void of his fanged mouth as he considered the things that might happen to Bansh once he caught him, before he returned him to the Master.
Anticipation scraped through him as he circled the village, now brightly lit with torches, searching for the trail. Stupid humans, they ruin their vision with torches. Make the night darker where the light doesn’t reach.Just as well that Benat does not track by sight so much. It didn’t take him long to find the stench he sought, not five cubits outside the beacon of light that the village had become. He grimaced again, shuddered – and pursued. 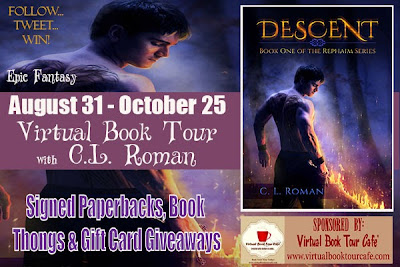 a Rafflecopter giveaway
Posted by KrissyGirl at 7:04 PM