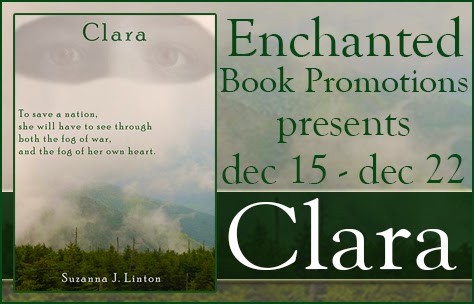 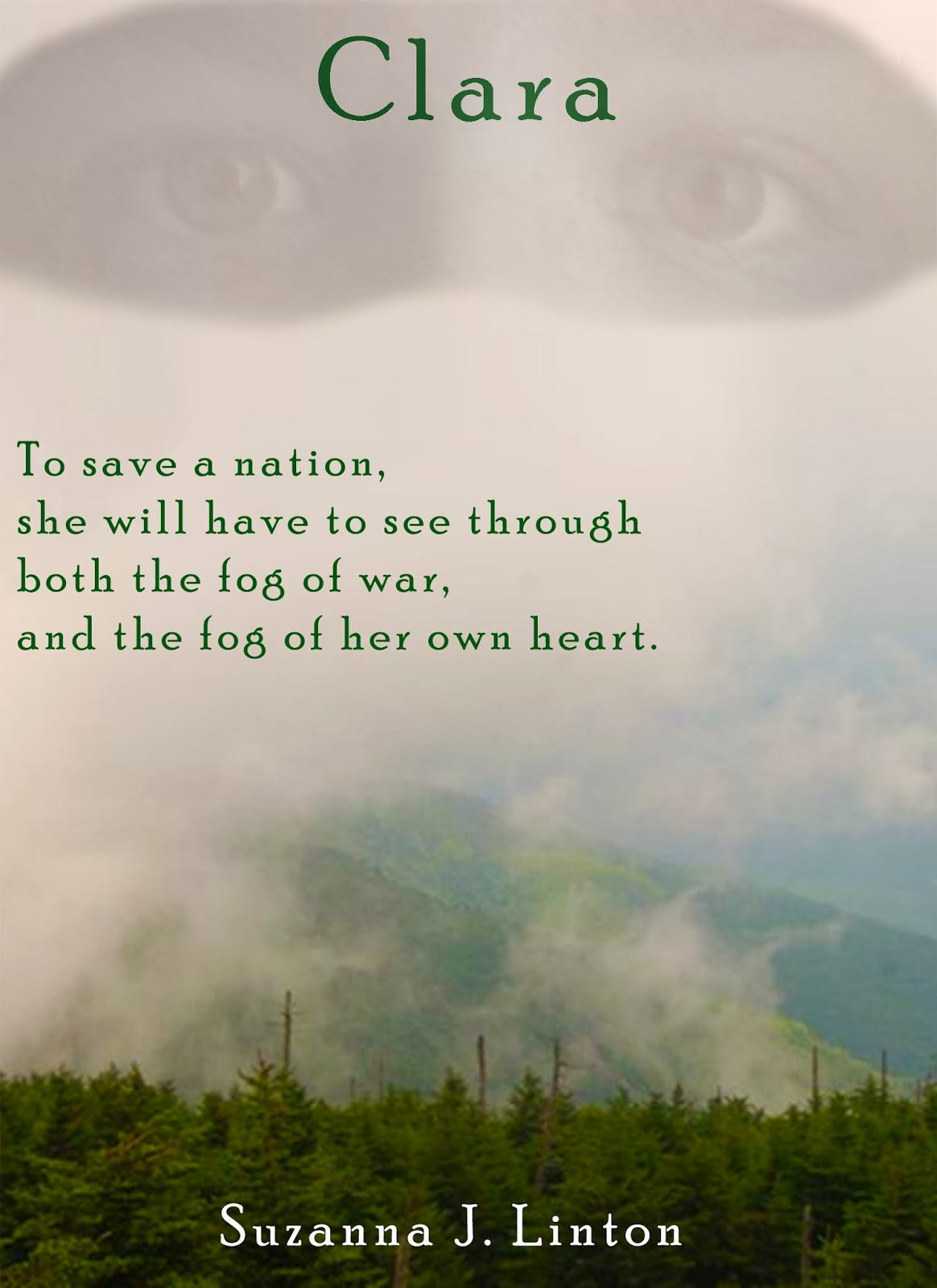 To save a nation, Clara will have to see through both the fog of war, and the fog of her own heart...

Sold into slavery as a child, and rendered mute by the horrors she suffered, Clara's life extends no further than the castle kitchens and their garden. Those who know about her just think of her as the dull mute girl who may be a little soft in the head, not knowing that she carries within herself a precious gift: the ability to see the future. This is a gift she keeps secret, though, for fear of persecution.

However, a vision prompts her to prevent a murder, shoving her not only into the intrigues and gilded life of the nobility, but also into a civil war brewing in her country. As events unfold, and she is drawn deeper into the conflict, she meets an old friend, makes a new one, and begins to unearth secrets better left buried.

Driven to learn the truth about the war, and about her friends, Clara embarks on a journey that takes her from her beloved mountains to the very Capital itself, Bertrand, where she is confronted by an evil both ancient and twisted. The only problem is, her own anger and prejudices are the catalysts her enemy needs to complete its plans. If she is not careful, not only will the entire nation be lost, but her own soul as well.

Clara dressed with nervous, cold fingers, the fire casting large, malformed shadows onto the walls.  On her table sat the remains of a light breakfast.
"His lordship told me to bring it, as well as to wake you." the maid had whispered.  She set out her clothes with a look of disdain.  Clara found out why quickly enough: they were dark brown boy's tunic, shirt, and trousers.  She managed to find suitable boots in the bottom of her wardrobe.
Outside, her breath puffed white vapor as she crossed the flagstones in the early morning light, the sun barely cresting the tree line. She walked with long strides to the stables, ignoring the stares of servants and soldiers, and found Emmerich already at his sword exercises.  Holding his sword carefully, he slowly worked through forms and stances, then repeated them more quickly, over and over, until he became a blur and his blade sang through the air, the sun glancing off the metal.  She watched with awe.
When he finished, he turned to her.  "You're late," he said.  Today he wore the uniform she first saw him in and the way the sun cast its light around him made her feel shy and exhilarated all at once.  But remembering what he said of her yesterday tossed cold water on her feelings.
She reached for her slate, only to find that once again, in her excitement, she left it in her room.  She settled for a glare.
He grinned and waved her over, sheathing his sword.  When approached, he held out a wooden practice sword.  "We'll start with this."
She held it as if she expected it to bite her.  With a sigh, Emmerich came up behind her, reaching around her to arrange her hands and fingers on the hilt.  She tensed.
"Clara," he said softly, "I am your teacher this morning.  When we meet at this time, that is what our relationship is: teacher and pupil.  You have no reason to fear me.  Now.  Part of fighting is being loose.  You have to be relaxed; it makes it easier to respond.  Take a deep breath.  Fill your lungs.  That's it.  Now, let it out.  Again.  Take in your tension.  Now, let it out with your breath.  Again.  Good."
He smelled like leather, soap, and musk.  Clara would admit to herself much later that it was mostly his smell that made her stomach unloose and her shoulders relax.  But that morning she only credited his good teaching skills.  He placed his hands lightly on her hips and turned them slightly.
"Bring your right foot back.  No, too wide.  Your feet can be no wider apart than your shoulders.  Good.  Bend your knees a little.  Very good."  He reached up and tilted her forearms up.  "This is your defensive stance.  Now, I'm going to guide you through some forms."
They worked until the sun came over the tree line.  Steward Warren interrupted them with a cough.  Emmerich frowned, but let Clara come out of her stance.  Her legs and back ached.  She thought longingly of the bathing room.
"We'll meet here tomorrow at the same time," he said.  Turning, he strode away, the steward hurrying to keep up.
"I think you did well," said a voice suddenly.  Clara whirled, jerking the sword up into a defensive pose without thinking.  Gavin leaned against the stable wall.  Blinking, she smiled shyly and dropped the pose.
"I don't like that you need to learn this,” he continued, “but...you did well."
He straightened and walked away.  Clara opened her mouth, trying to make herself call out to him, to ask him if he really did think she was learning well, to perhaps explain everything he said yesterday, but nothing came.  She watched helplessly as he turned the corner out of sight.

A long time ago, in a notebook I can no longer find, Clara was born.  However, she was called Alisha and Emmerich was called Marco.  They somehow transported from Earth to this fantastical land (that would later be called Lorst) for reasons that I never explained.  Then, suddenly, a sorceress!  And a quest!  And a magic sleep!

But the idea of Clara, of a young woman thrust into situations beyond her understanding and beyond anything she's had to deal with previously, stayed with me.  I suppose this is because it spoke to me of my own journey into womanhood.  I grew up in the very rural, deep South and we were very poor.  More than once, we stood only a step or two above homelessness.  The world outside our county seemed incredibly large to me.  Adulthood just appeared to be one large, complicated burden that I dreaded.

As I transitioned from that rural life to a slightly more urban one, and received a higher education, adulthood slowly became a more manageable undertaking, though still fraught with uncertainties.  At times, I still feel as if I've been thrown into things "beyond my ken", to use the Scottish phrasing of my grandmother.  If anything, the idea of this persevering, insatiably curious woman rose all the more strongly in my mind as someone with whom I could identify.  I kept thinking about what I tried to say in that first novel all those years ago.  When NanoWriMo (National Novel Writing Month) came around in 2010, I decided to give Alisha (soon to be renamed Clara) another go.

It took about two years before I finally polished CLARA enough to be ready for submission to agents.  I spent another year, on and off, submitting.  If I received an answer at all, it was either "This isn't what we're looking for right now" or "I'm just not excited enough about this".  The first I can understand.  The second?  I wasn't really sure how to help agents to be "excited" about my story other than doing my best with my query letter and tweaking the first two chapters.

Finally, I gave up trying to break into traditional publishing and turned to the avenue of self-publication.  Once more, I felt as if I stood on the edge of something beyond my full understanding.  Self-publishing online felt like an enormous undertaking that I wouldn't be able to do.  But writing CLARA taught me (or, at least reminded me) of the value of courage.  There is a lot of courage needed to throw a novel into a world where there are so many other novels clamoring for attention.

Then, much like Clara, I had a moment of pure clarity, when I realized what I wanted.  I wanted people to read what I've written.  Maybe one day I can make it in traditional publishing, but what matters isn't the money or any sort of fame.  What matters is getting out the story that's been living in the back of my mind for well over a decade.  When you realize what you want, everything else becomes so much simpler.

CLARA is about a girl, sold into slavery as a child, who has an extraordinary ability to see the future.  It's about this girl being thrown into a civil war and a social station that she knows little to nothing about.  She must trust others to tell her, truthfully, what is going on around her so that she can make the best decision in regard to her abilities.  When that trust is shattered, then Clara must make a decision, one that could decide the fate of an entire nation.

There's also romance (requited and unrequited), action, a sociopath, torture, revenge, and magic.  The story is told not only through Clara's point of view, but also the points of view of the men around her, the men that control the world she inhabits and in which she wishes to gain independence.

I hope that those reading this post will go and read at least a sample of the novel, which begins on the day Clara's childhood ended.  I hope that the message I tried to convey reaches you and that you will see some of yourself in Clara. 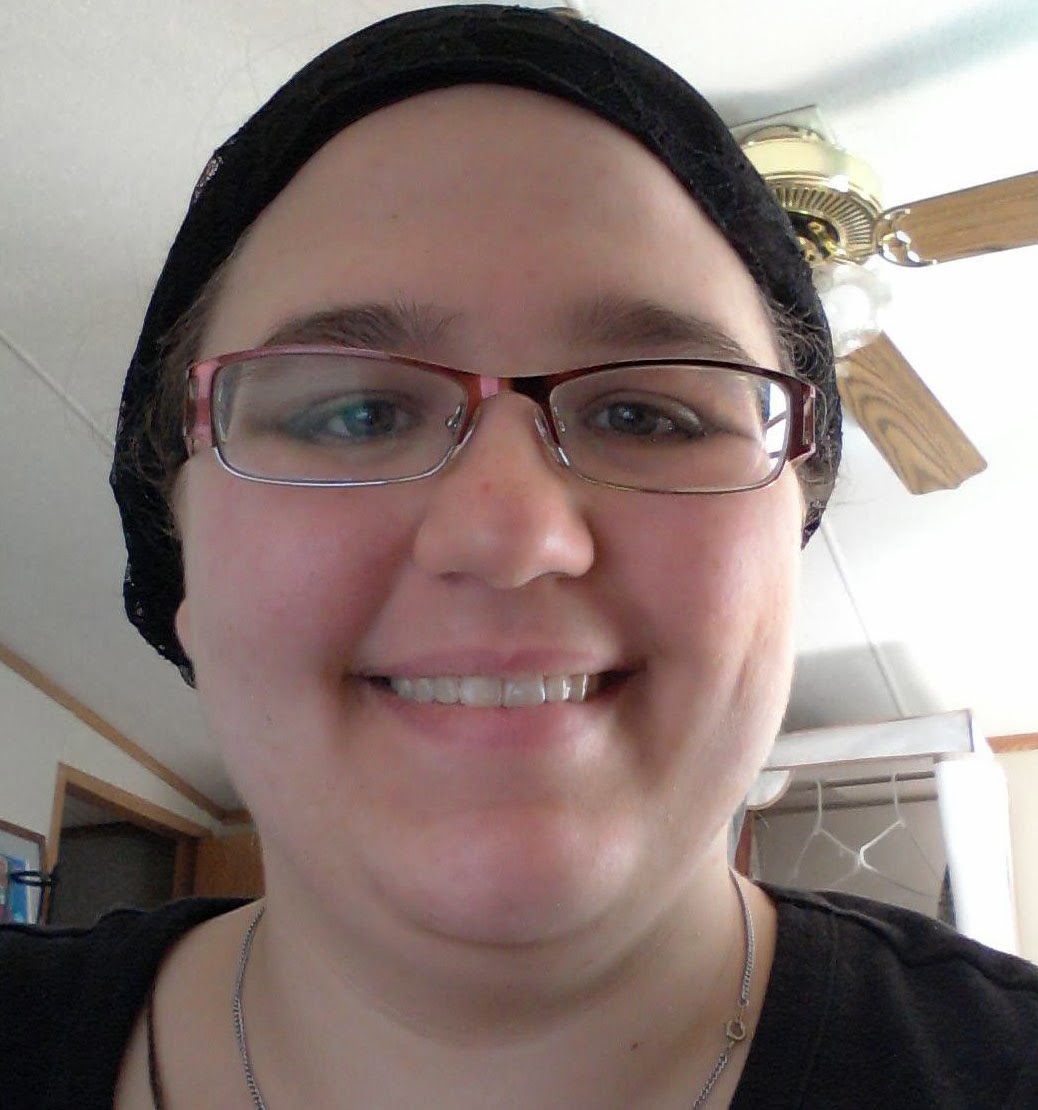 Suzanna Linton was born in South Carolina and grew up in Orangeburg County. In 2002, she attended the summer program in fiction and poetry for the SC Governor's School for the Arts and Humanities. After graduating high school, she went on to Francis Marion University, where she majored in English. In 2013, she received Honorable Mention in the Sidney Lanier Poetry Award Competition.

When she's not writing or working at the local library, Suzanna can be found either reading or gardening. She also loves to watch movies and television series. Right now, she's nose deep in The Walking Dead, White Collar, and Star Trek.

She lives with her husband and their two dogs, Benedict and Scholastica, in Florence, SC.

Posted by KrissyGirl at 7:17 PM