STRUNG OUT
A Needles and Pins Rock Romance

the debut novel
by 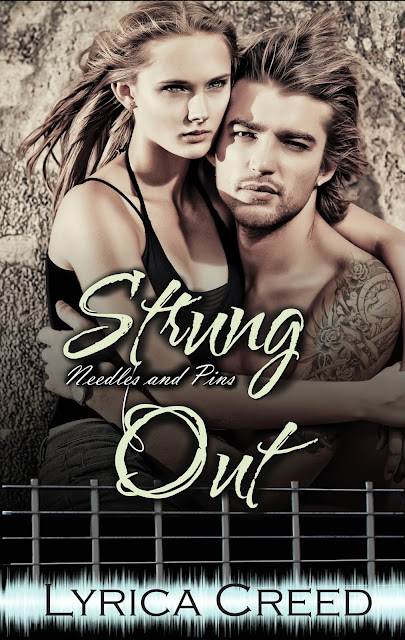 Finding my best friend and getting the hell out of California is top priority. Especially as the relationship with my rockstar stepbrother becomes more complicated with each passing day...

I’m on the tour bus partying!

The text from my best friend, Ivy is one of her last. When weeks stretch with no further contact, I travel to L.A. to track down the band known as Rageon and find Ivy.

As the daughter of a groupie mom, and of a rock star father who fatally overdosed, I know the dangers of the world my friend disappeared into.

My ex-stepbrother, Gage, a musician who’s just come off tour invites me to crash at his place.

The last time I saw Gage in person, we were teens. He's a popular presence on social media, so I’m prepared for the tattoo-covered rocker who answers my knock. What I’m not expecting to find is that the sweet, sensitive teen I grew up with is now an irresponsible, partying playboy who lives for his next fix.

As the search for Ivy narrows, my relationship with my rockstar stepbrother becomes more complicated. The tingling tug of attraction toward him is unexpected--and unacceptable. First, we’re practically siblings. Most importantly, I’ll never allow myself to fall for a musician, especially one with a drug addiction.

Gage teams up with me to find Ivy, introducing me into the right circles and guarding my secrets.

My search for Ivy takes me places I never wanted to go...

And my heart is an unwilling passenger on that dark ride. 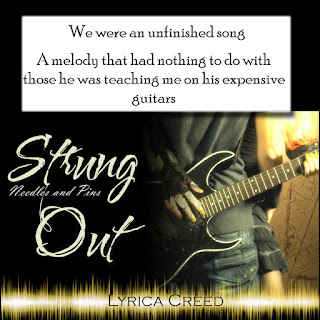 I stretched out on the sunning pad, bringing one knee slightly up, and lifting my arms above my head. I didn’t have to look toward the studio to know Gage was watching. His gaze was a pleasant tickle on my skin, and the sounds he cajoled from his guitar pulsated a pleasure point in the pit of my stomach. The combination caused a sweet, hot burn between my legs.

I was falling in love with him. Either I had been since my teen crush days and had right this second realized it, or I had fallen hard—yesterday morning with seven words.

I would have taken care of you.

Did he have feelings for me? Or did he watch me with fire in his eyes and continuously make up excuses to touch me out of desire only?

I worked on my self-brainwashing technique.

But Gage was Gage. The boy who had taken care of me. The man who wanted to...

A few more measures drifted over the pool and then dwindled to a pause. “You ever going to order the linguine?” he asked.

We had hashed over what we wanted for dinner and had decided on Pace, an Italian restaurant that delivered in the area.

“What are you going to do when I leave?” I grumbled about the chore and didn’t immediately leave my comfortable position to wade over to my phone.

Was my leaving getting to him too? His eyes seemed sad and distant for a moment before he recovered and retorted. “Same thing I did before you showed. Throw wild parties. Fill the pool with naked models who will order me food and bring me drinks.”

I laughed. But the sound seemed fake to my ears. The thought of nude women doing Gage’s every bidding was so not funny to me. But since he was being big brother taunting me, I served up sassy-little-sister-on-a-stick right back. “You sure you had all that going on? Pool looks empty to me. When I came I was hoping you’d have parties with hot rock stars hanging all day.”

One second later, he had vacated the chair and was in the water. Five seconds later, he’d reached my teak island and was hauling me off as I screeched.

“You need to cool off, little mermaid!”

His grip relaxed, allowing me to slide down his front until I was standing in the knee-deep water. When I shivered, it wasn’t because I’d cooled off! Quite the opposite.

“What would you do with these hot rock stars?” His challenge was a husky rumble near one of my ears.

My gaze glided from the hand underwater on my waist, up his arm, taking in the decorative ink—barbed wire music scores ran up the inside of his arm and beginning at the bend, spiraled up his biceps and triceps. “Hot rock star… Half naked in the pool…” I used his own images against him. “Hmm. I don’t know…”

In retaliation, he hooked an arm beneath my knees, prepared to unbalance me.

“Don’t… I don’t want to be all wet again…” I was laughing so hard at his antics, I didn’t immediately grasp what I’d said until his expression became even more animated.

I’d hiked head-on into that one. His eyes were still alight with mischief. But they also glittered dark and dangerous. In the position he had maneuvered me into, he could drop me, and I’d fall backward, dunking under before I caught myself. Or he could hold me closer… and kiss me…

Either way, I’d end up wet.

“Very sure.” It took every ounce of willpower to force the two words out.

I could call Derrick as soon as my plane landed in Belize. Or I’d have a fling. What I wouldn’t do was cross what was becoming a very thin line—perhaps even a dotted one—between stepbrother and lover.

The plunge into the water startled me. I’d been so sure Gage wouldn’t drop me when I’d drifted for a few seconds into my thoughts. My elbows hit the smooth bottom, and I pushed above the water, sputtering and wiping the hair from my face.

“You ass!” I skimmed the surface with my hands, raining a series of splashes until he was deluged and dripping.

He didn’t even fight back, simply shot one of his smirks and hastened back to his chair and his ever-ringing phone. 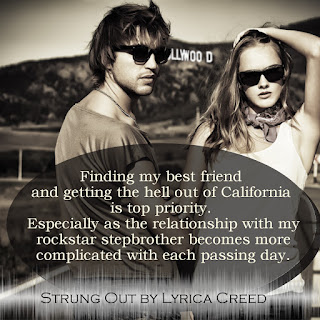 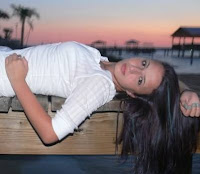 Lyrica Creed lives and breathes music. Austin, Texas will always be home, but she surrendered to wanderlust just out of college. Her phone stays handy while sleeping to record the melodies or verses she wakes to. One night instead of a tune, she roused to a plot and characters whispering in her ear, and Strung Out was born. When Gage and Scarlette weren’t content to fade away into their HEA, Hung Out followed. 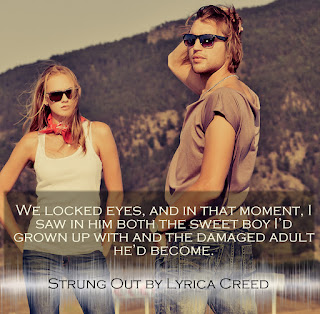