Terra Nova (Book #3 of The Variant Conspiracy) by Christine Hart 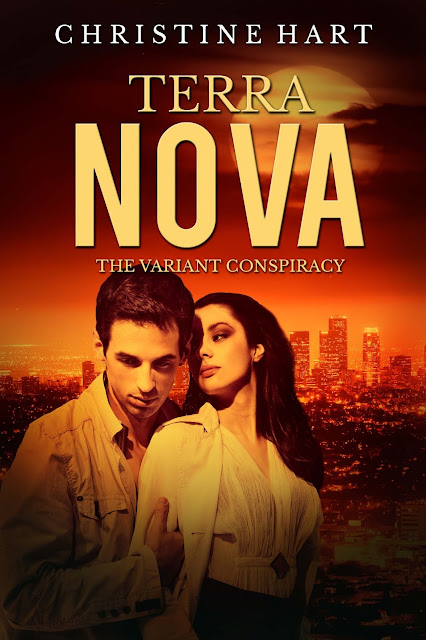 The end of humanity and an unrecognizable future Earth are now days away. After their first glimpse of the Terra Nova virus, Irina and her variant friends know their former employer’s plans are almost at hand. Their failed attempt to publicize Ivan and Innoviro Industries’ horrific activities has left them utterly reliant on their own wits and weapons.

After surviving a catastrophic earthquake in San Francisco and destroying a secret viral testing facility, Irina’s crew has traveled by a variant portal to London. On the other side of the world, they begin tracking when and where Terra Nova will be unleashed on the world. They know stopping Terra Nova is only the beginning of unraveling Ivan’s plans to reinvent the planet, but if they can’t stop this virus, there will be no one left to save.

Faith returned with four glowing green drinks in a cup holder tray. Clear plastic cups, lids, and straws let the liquid inside glow through. It smacked of something that would spawn ninja turtles. “These are the Incinerator’s own toxic spills. They’re just vodka and sprite with a capful of that crap they put in glow sticks. Did you know you can drink that shit?”

Jonah reluctantly took a plastic cup. “Are you sure we should drink it?”

“It’s not going to kill us. No more so than the alcohol.” Ilya picked up a cup and took a long generous pull on his straw.

I took an experimental sip. It tasted like vodka and sprite. There was a mildly synthetic aftertaste, but nothing toxic. I took another, much larger sip. Aha – the warmth I’d been craving since my shower. I might stand a chance of sleeping tonight after all.

Jonah followed my lead and took a slurp on his straw, pausing to let the liquid do its work. He leered at me with a devilish grin and grabbed my hand, pulling me off to the dance floor. His touch radiated energy into me, right through my skin waking up every cell in my body.

He leaned down and kissed me, running his hands through my hair. His powerful grip felt restrained, as though his mind fought to control his body. The intensity surpassed our first night together. After we had spent so long mocked by his unstable mutation, first hurting me and then nearly killing him, we were both finally stronger than ever.

“I can’t help myself. I need to touch you. I don’t ever want to let you go. We’re going to make up for some lost time tonight.” His lips brushed my ear as he spoke. His fingers traced the line of my neck and it sent shivers down my spine. So much for sleep! 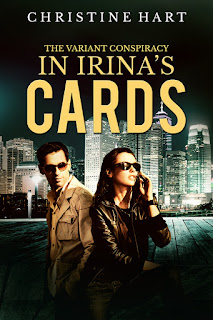 In Irina’s Cards is the story of 19-year-old Irina Proffer who discovers a world of fringe genetic science and supernatural mystery. Following visions inspired by a strange deck of tarot cards, Irina learns of an amazing variation in her genetic code. She has the ability to see the past, present and future, in her life and the lives around her.

Irina sets out from her northern home for BC's coastal capital to get answers. She is drawn in by a powerful first love and a compelling, yet dangerous mystery. Working at Innoviro Industries and meeting other 'variants' brings Irina closer and closer to the dark truth about her origins. She finds herself at the heart of two overlapping love triangles as she scrambles to escape her employer's grip. At the close of the novel, Irina realizes she has merely scratched the surface of a frightening conspiracy on a global scale.

“You know what they say about the people here in Victoria, right?” said Jonah, as he watched me watch everyone else.

“No, I can’t say that I do. More money than they know what to do with?”

“True, but not as bad as Vancouver. Ever heard of the saying ‘newlyweds and nearly deads’ or as my mom says, ‘God’s waiting room.’”

“My mom’s a dark lady, but hilarious. I hope you don’t mind, but I also invited Cole and his sister. You’ll love this little restaurant. It’s got awesome food and live music, but not too hipster-ish,” said Jonah.

Something dropped in my chest. If Cole brought his sister, we were just a group of friends going for dinner. I felt silly for having thought that we were going on a date. We turned another corner and Jonah pulled the car over next to a brick building with a 50’s style neon sign that read ‘Cymbals’ next to a caricature of a drum set. I followed Jonah through the wrought iron gate and looked up at the oak tree on the lawn next to the patio. Tiny fresh leaves and new buds covered the gnarled old tree. It was also home to dozens and dozens of sneakers, canvas shoes, skate shoes, oxfords – basically any kind of shoe with laces to tie together.

The air felt warm enough to linger, so I walked over to the tree and looked upward. I smiled. I reached up to one of the lower branches and touched one of the shoes. The yard and the tree melted away. I saw the face of a girl with faintly bluish skin and platinum hair. She turned and I saw two leather-like wings flex and relax. Her shirt had been cut to make room for her wings which stretched out past the frayed edges of the fabric. She was standing in a sewer or catacomb.

Faces milled around the winged girl. It wasn’t quite like a party, maybe more like a camp. An older lady standing next to the winged girl reached down to the ground. She pinched the concrete and plucked something, maybe a stone, off the surface. The stone wriggled. It was a camouflaged beetle, exactly like the one I’d seen on my first day in the city. She lifted the beetle to her mouth and I reeled back.

The yard outside Cymbals surrounded me again in a blink. Jonah stared at me. I noticed my arm had stayed raised beneath the shoes and withdrew it.

“Are you all right?” 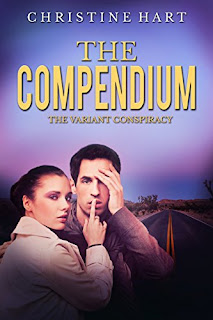 Irina and her renegade variant friends are scrambling to pick up the trail of their former employer, Ivan, and his globally catastrophic scheme. After strategically sharing their story with the media, the group heads south from Vancouver to Seattle hoping to recruit more experienced—and lethal—variants to their cause.

Their attention develops a laser focus on an engineered disaster mere days ahead of them. Ivan is using what staff and resources remain of Innoviro Industries to set off a violent earthquake in San Francisco. While they fight to stop the earthquake, Irina pushes the love of her life Jonah as far away as she can, trying to keep his unstable genetic degradation in check.

Irina’s friends think they’ve seen the worst that Innoviro could bring forth by the time they reach a secret facility in the Mojave Desert. As they near the property, the group uncovers a horror none of them had ever imagined.

I awoke standing on an orange cliff under a purple sky. An unfamiliar canyon wound under the horizon on either side. I looked down to see a river of metallic sludge oozing along the canyon floor. Chunks of debris floated in the sludge. Steam intermittently bubbled here and there. The sky darkened as I watched the river. Lights streaked across the sky, red and white, blinking. Black pellets fell from the lights, exploding in the distance as they hit the ground.

A figure walked through the smoke left by an explosion on the cliff directly opposite from me. While the smoke cleared, Ivan reached the edge of the cliff. His face distorted with a ripple. He reached up with both arms, burying his hands in his hair. His fingertips pulled on his scalp. Ivan’s expression melted. He peeled off his face in a downward motion taking the rest of his body with it. In Ivan’s place stood a red-eyed humanoid reptile with giant curling horns, identical to what I’d seen reflected in the window of Ivan’s apartment.

The horned figure let out a ferocious roar. The ground shook. The landscape shivered until the canyon transformed into a green valley below dry sage-covered hills. Ivan seemed himself again, smiling and tapping his wristwatch, strolling toward me. I shuddered, shaking my head. The green grass floor trembled and a crack opened horizontally between us. Trembling turned to shaking. The crack ripped into the ground in both directions until a canyon separated us.

A hand brushed my cheek. I whirled to find the source of the touch. I found myself lying in bed back in the guest bedroom in Josh’s farm house. I shouted and sat up.

Located on BC’s beautiful West Coast, I write from my suburban Burnaby home staring at North Vancouver’s iconic Coast Mountains. I love writing about places and spaces with rich history and visually fascinating elements as a backdrop for the surreal and spectacular.

In addition to my undergraduate degree in writing and literature, my background also includes corporate communications and design. I am a current member of the Federation of BC Writers and SF Canada.

When not writing, I have a habit of breaking stuff and making stuff – in that order – under the guise of my Etsy alter-ego Sleepless Storyteller. I share my eclectic home and lifestyle with my husband, baby daughter and preschool son.

MoB Promotions
Posted by KrissyGirl at 1:00 AM