What Happens In Bangkok by Daryl Devore

WHAT HAPPENS IN BANGKOK
Two Hearts ~ One Love, book 1
by Daryl Devoré 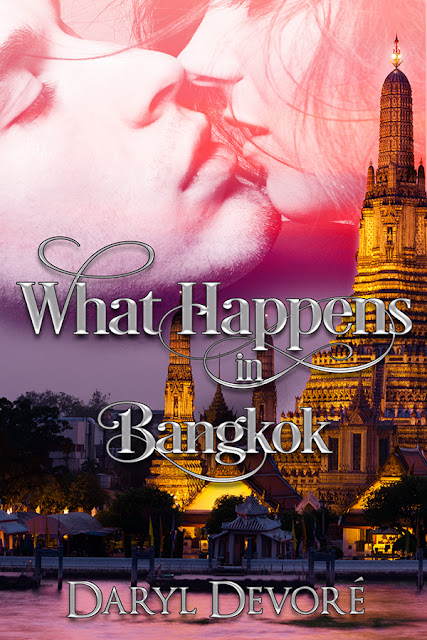 Erika Bailey, owner/manager of a drag queen club in Bangkok, Thailand has happily settled into all aspects of her new life, except for her lack of a love life. When a new diva auditions, Erika is bewildered over her instant attraction to the blond God, Apollo.

Darien Scott is on vacation after a world tour and mistakenly figures the safest place to be is at The Black Dragon with the head of a Triad. When the club is hit, Darien is the only person to get out alive. Now he's running from the police and a Triad. Mistake number 1.

Disguised as a drag queen, he's hired by Erika, but falls hard for his new boss, then struggles with not coming clean with her. Mistake number 2.

Can he fix his mistakes and find a life filled with love or is he headed straight for mistake number 3? 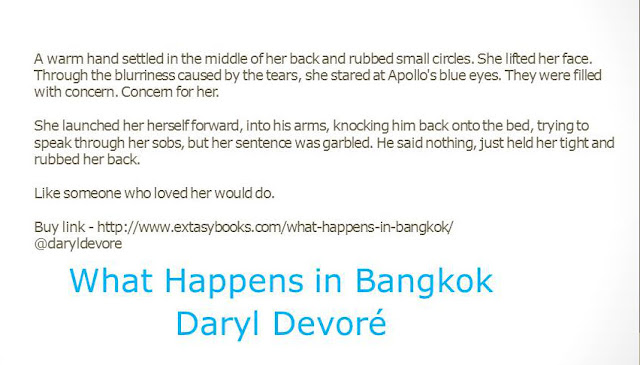 Erika dipped a chip into the salsa and popped it into her mouth. "I can't decide. Mexi-taco or Cali-taco."

"Number twenty and twenty one."

"Simple." He placed his menu on the table and picked up a chip. "Get one of each, but make sure there's room for dessert. 'Cause I want a Churro. Or maybe the Sweet Chimichanga."

"Or both." She popped a salsa-covered chip into her mouth.

"Awesome." Darien dipped a chip and bit into it, trying not to look like he couldn't tear his gaze from her. The elegance of her moves as her fingers unfolded and reached for a chip. The curve of her wrist as she scooped some salsa. The jolt in his body when she opened her mouth and licked her lips. Watching the chip disappear past her teeth was too much for his control. His cock sprang to life. He'd never be able to look at chips and salsa the same way again.

The waitress placed the tray of monkey wings on the table. Erika squealed as they both reached for one. The happiness spread from her face to her body. Her nipples were visible, pressing against her dress. The pressure in his slacks increased. Her lips parted. He stifled a groan. She slid the piece of meat into her mouth and lightly bit into it. Her teeth grazed against the chicken meat, pulling it from the bone. A dribble of sauce escaped. She flicked her tongue across her bottom lip, closed her eyes and heaved a delighted sigh. Sweat ran down Darien's back. Yes, the wings were spicy. But the vision across from him was twenty jalapenos hotter. She picked up another wing. Darien trembled, grabbed his drink and chugged half of it. It did nothing to cool his soaring temperature, or reduce the swelling in his pants.

The visual of her lips wrapped around the chicken wing morphed into her lips around his fully aroused cock. As she pulled the next wing from her mouth, he swallowed–hard. He wiped his brow. "This is hot."

"Not too hot for you?" She placed her index finger in her mouth and slid it out, licking off the sauce.

Daryl Devore (@darydevore) lives in an in old farmhouse in Ontario, Canada, with her husband, a large salt water aquarium full of fish, a black cat named Licorice and some house ghosts. Her daughter is grown and has flown the nest. Daryl loves to take long walks up her quiet country road, or snow shoe across the back acres and in the summer, kayak along the St. Lawrence River. She has touched a moon rock, a mammoth and a meteorite. She's been deep in the ocean in a submarine, flown high over Niagara Falls in a helicopter and used the ladies room in a royal palace. Life's an adventure and Daryl's having fun living it.

Posted by KrissyGirl at 1:00 AM