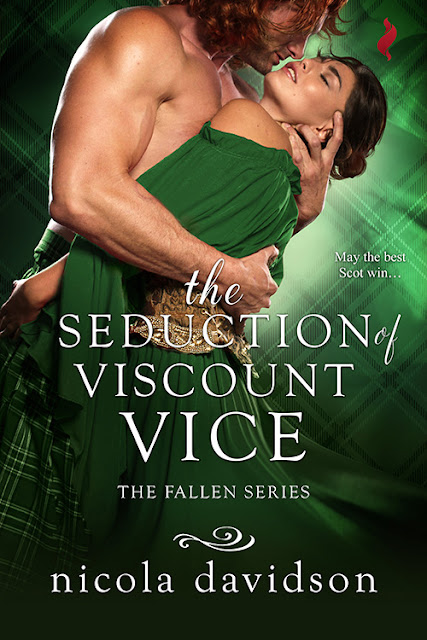 Proud Scot and Fallen co-owner, Lord Iain ‘Vice’ Vissen is dedicated to performing in and producing the pleasure club’s hedonistic shows. Until the night he apprehends a rogue footman in their midst and discovers the spy is Lady Mairi MacNair—the woman who long ago broke his heart.

Born an earl’s daughter but now a seamstress, Mairi has returned to London to help open a superior pleasure club to Fallen, and finally realize her dream of being the seductive leading lady. But when she discovers her main rival is Iain, the man she loved beyond reason and was forced to abandon, she is soon caught in a web of lies, secrets, and raw, scorching passion that time hasn’t dimmed…

In one swift movement, Vice had Mairi against the wall, his fingers tangling in her sweetly fragrant hair as he straightened the combs. “What are you doing here? Really?”

Her breathing quickened, her lips glistening as she ran her tongue over them. “I was invited.”

“No. Something compelled you.”

“Indeed. Decent food. Ramsey also mentioned you might still be at least part Scot and have proper whisky.”

As punishment for the impudence, he slid two fingers under her bodice and pinched one already hardening nipple. Mairi moaned, the soft sound primitive and needy, but rather than continuing, he withdrew his fingers and smiled. “Try again, my lady.”

“A poor attempt to seduce me. I know you actually prefer blondes now.”

“The beauty at the Castlereaghs.”

Vice choked. “That was Helena!”

“You would be, too, if people were referring to your unmanageable baby sister as a beauty. Christ. For the safety of the world and my own sanity, she should probably go and live in a nunnery atop the Pyrenees until she is at least in her dotage.”

“Bah,” said Mairi, shaking her head. “What a hypocrite you are. Hellion was a high-spirited girl, but never silly. I doubt she has become a henwit who would surrender her virginity to a penniless rake just because he smiled at her.”

“And what a master you are at attempting to change the topic of conversation. Again, I ask, what are you really doing here?”

She glared at him, her eyes blue infernos. “What woman would turn down an invitation to see the most handsome man she’s ever known in his own luxurious home, to forget for a few hours that she is naught but a worthless servant with so many dreams unmet?”

Shocked, Vice searched her face for signs of guile. But for once, she held his gaze unflinchingly. “No,” he said softly. “No. Not a worthless servant. Never, ever that. In fact, a brave and beautiful Highland warrior.”

Mairi’s eyes glistened, and without thinking, he cupped her face. She tensed, then with a shaky exhale, she turned into his touch and rubbed her cheek against his palm. The moment stretched to infinity, all the betrayals and mistakes and lost time raging a silent battle against a hope and a love that had never quite died. Dare he believe? Fuck, he wanted to. So badly. To forget Scotland, to forget the last decade, and publicly claim this woman for his own.

To save her, he must ruin her.

Lord Sebastian St. John, dedicated bachelor and a co-owner of Fallen, the most scandalous pleasure club in London, is known as Sin for good reason. Orphaned by a shocking accident, Sin long ago vowed a life of solitude and decadence. Yet when Lady Grace Carrington begs for his help destroying her reputation, Sin can't turn the ton's most proper lady away.

Obedient daughter, wife, and young widow, Grace has had enough of being controlled. After her father arranges a second loveless marriage to an eminently respectable ancient, Grace plans a fortnight of defiance and self-ruination to stop the wedding. But as Grace enters the heady, risky world of an affair with Sin, she finds herself inexplicably drawn to him—and she soon realizes two weeks won't be nearly enough.

Disinherited by his parents and estranged from his wife, Fallen pleasure club co-owner Lord Grayson ‘Devil’ Deveraux long ago learned to place his trust in ledgers rather than people. But his ice-cold reserve hides the scandalous truth: he’s a man who craves pain with his pleasure, and a loving lady to instruct him.

Banished to the country when her whirlwind marriage collapsed, Lady Eliza Deveraux never knew why Grayson fell out of love with her: she’d tried so damned hard to quell her fiery self and be a proper, obedient wife. But when Eliza is forced to return to London and back into Grayson’s intoxicating world, banked passions reignite. Can a marriage built on secrets and pretense truly get a second chance? 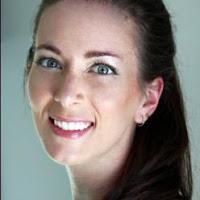 NICOLA DAVIDSON worked for many years in communications and marketing as well as television and print journalism, but hasn’t looked back since she decided writing wicked historical romance was infinitely more fun. When not chained to a computer she can be found ambling along one of New Zealand’s beautiful beaches, cheering on the champion All Blacks rugby team, history geeking on the internet, or daydreaming. If this includes chocolate—even better!

Posted by KrissyGirl at 1:30 AM