Let nature and the elements be your guide as we introduce you to Goddess Of The Wild Thing! 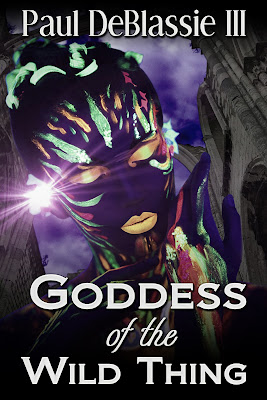 Goddess of the Wild Thing is a dramatic tale of one woman’s spiritual journey where magical happenings, unexpected turns of fate, and unseen forces influence her ability to love and be loved. Eve Sanchez, a middle-aged woman and scholar of esoteric studies, encounters a seductive but frightening man who introduces her to a supernatural world in which the wicked powers of a surrogate mother’s twisted affection threaten love and life. In the mystic realms of Aztlan del Sur, Eve and three friends struggle with whether bad love is better than no love and discover that love is a wild thing. 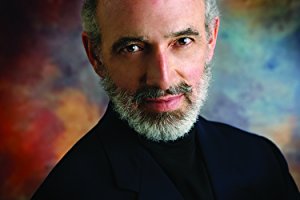 Paul DeBlassie III, Ph.D. is a depth psychologist and award-winning writer living in his native New Mexico. He specializes in treating individuals in emotional and spiritual crisis. His novels, visionary thrillers, delve deep into archetypal realities as they play out dramatically in the lives of everyday people. Memberships include the Author’s Guild, the Depth Psychology Alliance, the International Association for Relational Psychoanalysis and Psychotherapy, and the International Association for Jungian Studies.

His other award winning book: 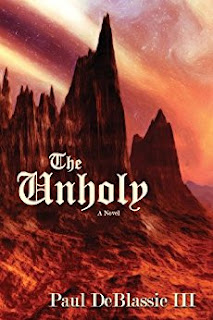 A young curandera, a medicine woman, intent on uncovering the secrets of her past is forced into a life-and-death battle against an evil Archbishop. Set in the mystic land of Aztlan, "The Unholy" is a novel of destiny as healer and slayer. Native lore of dreams and visions, shape changing, and natural magic work to spin a neo-gothic web in which sadness and mystery lure the unsuspecting into a twilight realm of discovery and decision.

Books On Fire Tours:  This was a difficult read. Not because it was a bad story. On the contrary. It was mind blowing! It was difficult because it messed with one's mind in the most clever and effective way, which only a Pscychologist can do. So what is it about?
Eve and her friends use yoga and other spiritual means to help them navigate life when it gets tricky, and the often elusive thing called love. Debating whether or not bad love is better than no love at all, they go through life's ups and downs together. Yet when Eve meets a man called Sam, who has potential, evil lurks and causes havoc in her life. An epic battle between good versus evil ensues between her and Sweet Mary, and in the process she finds her true self. BUT, there is so much more and as a reader you can only wonder what is real and not real.
Many people will complain about the lack of dialogue on this novel, but it is rich in back stories and information vital to the development of the plot. This book is not only filled with mystical and magical, but paranormal, metaphysical and occult elements. Essentially a great read for horror/ thriller fans, those who like a little romance will also enjoy this read.  Because it catered to all my needs as a reader, I give this book 5 stars.

"Paul DeBlassie III has an extraordinary ability to pull the reader into his mythical world, and the special effect depictions drawn within my mind while reading *Goddess of the Wild Thing *could easily match up with some of the most gruesome of horror stories on film. He transports you through an amazing spiritual journey exploring the power of fate and love. Packed with action, suspense and even romance, Dr. DeBlassie has written a truly brilliant and riveting supernatural story!” ~ Tamara Ferguson, international, multi-award-winning author"

"Paul DeBlassie III has a wicked gift in writing psychological thrillers, and he does it in a way I have never experienced before. In *Goddess of the Wild Thing*, he gave me a glimpse into his reflections, inviting me to draw closer to the dark side. His writing is rich with supernatural symbolism and, when all is resolved, deeply empowering.” ~ Uvi Poznansky, artist and award-winning author

“*Goddess of the Wild Thing* by Paul DeBlassie III brilliantly couples his in-depth knowledge of the human mind and behavior with his love of lore, imaginatively knitting a deeply psychological and esoteric story that will keep you turning the page. I could picture clearly the fantastical sense of place . . . a must-read magical tale.” ~ Luna Saint Claire, author of *The Sleeping Serpent*

"Dr. DeBlassie, author of the multiple-award-winning *The Unholy*, produced another novel with depth, action, and spirit in *Goddess of the Wild Thing*. For centuries we’ve struggled with whether bad love is better than no love. In this paranormal thriller, a fierce woman tackles the question with determination and fire.” ~ Rayna Noire, author of the *Pagan Eyes Series*

The stone altar was used by Eve and company to conjure natural energies of earth, air, fire, and water. Tonatzé symbolized feminine strength and ancient powers. Around the altar, the four women entered mystic states with intuitive inspirations and visions. The four mestizas frequently gathered at midnight, when the full moon shone most lustrously. They held hands, sipped their whiskeys, and inhaled magic herb. Soon the image of the Goddess flickered in rhythm with their soft singing under the light of the high-desert moon.  Chant and trance conjured natural magic. They yielded to relaxation, reverie, and trust in one another and the natural world.

Descending into a meditative state, they were whisked from one world to the next. On slips of paper, they quietly wrote their worries, dilemmas, trials, and tribulations.

Seeking answers and relief, they placed the folded papers in a granite bowl before the altar. They lit a match. Paper burned.  Silence wrapped its arms around the four. Gentle breezes stirred. Hoots of distant and nearby owls carried through the nighttime atmosphere. Flames from the granite bowl rose three feet and abruptly expired, devoured by darkness.

The ritual of fire fortified the coven, foul happenstance and unexpected hazard averted, all save one kind.  Man trouble waited for Eve like a demonic jack-in-the-box, head bobbing and grinning. Muscles up and down her back tightened. It was this that caused her to flee into denial, the thought of time wasted, mind and body pained. The desire to talk, confide in her friends about misgivings about Sam, the last worst guy ever, fled like alley cats into a lonely night. Denial made everything go away—and stay gone—better than a couple of vodkas on the rocks on a chilly evening.

A white cab edged out of the alleyway bordering the cantina. It pulled stealthily alongside Eve. She bent down and looked through the smudged passenger window. She wanted to make sure she knew the cabbie. Past midnight was no time to be in a trusting mood. 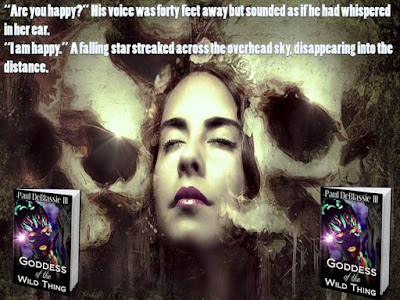 At three a.m., the proverbial witching hour of Aztlan, Sweet Mary left her apartment for the gathering of Las Brujas Malas, deep in the crumbling limestone edifice of vicious spirits. The condemned downtown limestone church, once a prosperous enclave of the Ecclesia Dei, had long been  abandoned. It sat adjacent to Sweet Mary’s bedroom, badly stained by gray and black soot.

Putrid odors of the cursed underworld that lay beneath its unhallowed edifice, curled through the atmosphere surroundingthe decaying structure.

Sweet Mary wound her way past the fenced and barbed wired blockade that deterred homeless souls and nighttime vandals. Her lithe frame smoothly squeezed between the slightly ajar, chained doors. She walked over the toppled wooden pews and stone statues littering the concrete flooring from the back of the church to its altar.

The religious artifacts had been defaced by those news media referred to as sledgehammer-wielding lunatics claiming clerical abuse as children.

She quipped to herself, Religion mocks, uses, and abuses. Nothing new under the black sun.

She opened a narrow side door that led to a rusted iron spiral staircase. Into the haunted and torch-lined basement that stretched thirty feet beneath the surface, she stepped. At the final stair, she touched bare earth.

Torches were lit along a cave of mirrors, shards embedded in the walls,  shattered remnants taken from the homes of victims who had defamed Las Brujas.

Anyone who dared speak ill of the brujas ended the day tormented, injured, or maimed. Crises happened. One second they were safe, the next mowed down by an out-of-control car, or mugged and cut, or worse, lured in by a soft and sexy vixen loaded with a nasty biological curse. Mirrors confiscated from homes during nighttime raids reflected the victim’s horrified face when doom struck. Sweet Mary hurried past the legions of rats scampering away from her every step into the cracks and crevices of the century-old limestone structure.

An unavoidable eyesore at the heart of one the most decayed areas of the often sinister downtown Aztlan del Sur. It was a meeting . In this haunted zone, Sweet Mary presided over the witches of black magic. They knew how to spot love, taint love, kill love. It’s what bad mothers did. It’s what Las Brujas did. It’s what Sweet Mary did—because what had been received must be given.

No one knew where they gathered. Evil demanded hiddenness. Street-smart folk and fear-ridden church folk knew them as Las Brujas Malas, the foulest of witches, not to be crossed. Even those who suspected the whereabouts of their lair dared not cross the street to look at the unholy building, now a crumbling religious edifice.

The witches met at the mouth of a deserted tunnel, which in former years led to the secret chapel of the reigning archbishop, who there entertained a bevy of female devotees. Las Brujas, the four desert urban witches, walked down the twenty-foot descent. Hard-pack dirt sloped gently into the entrance of the unhallowed region of the chapel that had become the accursed cave of Las Brujas.

They moved forward, into the mouth of the cave. 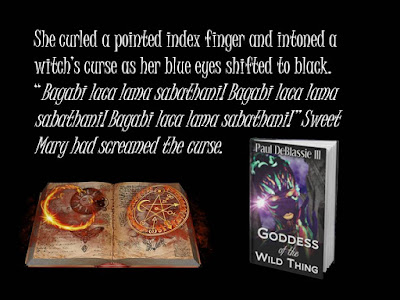 But here Eve was, paralyzed. Waves of gurgling and quicksand were no metaphor. Agitation could turn bad to worse. Eve clutched harder for a stable mind. It was a torment, nearly impossible not to panic. She gritted her teeth, tightened her mental hold. Gently, millimeter by millimeter, she managed to raise her right hand. Mud offered no resistance. She raised her right forearm out of the hungry maw of dirt and grit. She grabbed hold of a desert oak’s dropping branch. It held firm. Five fingers clutched like a vise. She lifted her left arm and hand. Inch by inch, she loosened her torso from the deadly mud. Low-lying olive tree branches gave steadier purchase.  Relief.

Memories of circling sparrows, an ancient warding against fated demise, provided a moment’s comfort. She pulled upward. Branches did not snap or break. They were supple. Evenly, she pulled with breath after concentrated breath. She gazed toward the sky. There were no sparrows overhead. The silence felt unnerving.

The sky shifted, turquoise bright turned to leaden gray. The desert olive branch snapped. Eve screamed and dropped. She sank to her shoulders. Quicksand lapped up past her chin, grains of sand forming crusts along her lips.

Clenching her teeth, she was grateful her mind hadn’t snapped along with the branch. Wits kept panic at bay.

Dying wasn’t a concern, survival was. It was the getting there that mattered—how it happened, how she did it. She detested the thought of dying by a witch’s curse, slipping into an underworld of final breaths and mud-loaded lungs. If she went down into the belly of the abyss and the mouth of a soul-famished witch, she’d do it on her terms. Middle finger out. 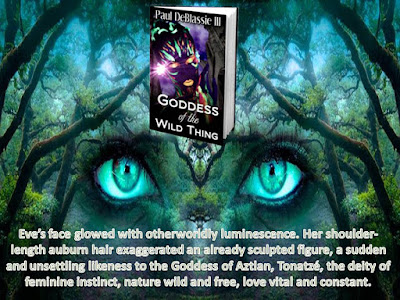 Book trailer with the Author's choice of music to listen to his book.

Posted by KrissyGirl at 4:57 PM