Loren Mackenzie is at the top of her game, leading an elite team of pro cyclists in the Women’s World Tour in Europe. But for her, cycling was a way to escape, using the burn of her muscles to cleanse her mind.
After a change in the management of her team, Loren is brought back together with a man she once loved. His amorous attention resurrects the feelings she once had for him, but also how he tried to force her to sleep with him, and the sting of his hand on her cheek at her refusal.


When mishap puts her in the sights of an A-list actor, the flirtation quickly develops into something more for Loren, but the relationship exposes her to the tabloid media, dredging up the past she wanted to bury. It also reveals a dangerous rival who puts her chances in the World Championship in jeopardy.


Love and obsession collide in the first book of the Wheeler series, can Loren stand at the center of the storm, or will she lose the success she has worked so hard to achieve?

In Darkness, There Is Still Light
Wheeler Series Book 2

"Atherton Leaves Her! Has the Actor’s Whirlwind Romance with the Women’s Pro Cyclist Run its Course?"
Loren Mackenzie knew the headline in The Sun was misleading, but the Elite Women’s World Champion cyclist still felt the sting. With her team’s season winding down, reuniting with boyfriend, Graham Atherton is tops on her holiday to-do list. But as rumors and innuendo swirl around the couple, secrets they have kept from each other shake their relationship to its foundation.
Her fragile confidence is tested when Loren discovers details of her relationship with Felix Lalonde were provided to the media. Still reeling from the headlines, a bittersweet reunion with someone she thought lost becomes the catalyst for reliving the fractured memories of her childhood. Resentment and betrayal only add fuel to the fire already burning in her heart.
All the while obsession and greed churn into a storm on the horizon, threatening Loren and those closest to her. When the tempest hits, what is uncovered tilts the axis of her world.
In the second novel of the Wheeler series, can Loren believe that even in darkness, there is still light, there is still hope; there is still love.

It’s the start of a new year for World Champion cyclist Loren Mackenzie and already, her luck has taken a nosedive. Tensions rise at training camp in Mallorca, Spain, with the arrival of team sponsor, Ryzak Sports. There’s something familiar about Maksim Ryzak’s charm, and while Loren can see through it, she can’t shake the attraction.
Fingers are pointed at Loren when a reporter hints at her involvement in a doping scheme allegedly begun by Felix Lalonde. She denies it, but her fears that no one will believe her drag her down. When pictures of Graham with another woman are published by the tabloids, a match ignites that could burn their relationship to the ground.
The Spring Classics begin with races in Belgium, the Netherlands, and Italy, where rivals become allies and friends become adversaries. Loren is tested in both mind and body, but she is determined to prove herself worthy of being a World Champion.
But, as one fire is put out, another takes its place. Loren is still haunted by Felix, and it’s his voice in her ear in competition, whispering she’s not good enough. Even with her friends and family rallying behind her, can Loren free herself once and for all? 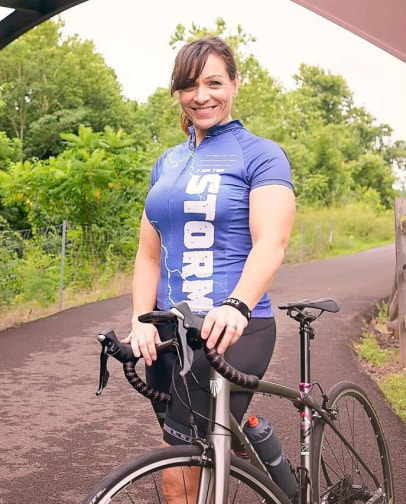 Sara has never lacked for imagination, but it wasn’t until the Fates decided to give the string of her life a tug, bringing her romantic leanings together with her passion for the sport of cycling and Poof! A story was written down and completed, much to her surprise and chagrin.

She is a (self)published author of women's fiction/sports romance novels, Wheeler and Wheeler: In Darkness, There is Still Light. A third novel to complete the series is in development.

The author resides in the suburbs of Philadelphia, PA, with her husband and their son. Sara is a paralegal for a law firm in Chester County, Pa, an avid road cyclist, and indoor cycling instructor at a national chain.

Posted by KrissyGirl at 4:00 AM